A&M's May engagement, where are we now, and where do we go from here?

It has been about a month since we posted our message regarding the new initiative.
We mentioned a few objectives and initiatives, and asked for feedback in regard to these.
So let's take a quick look at where we stand now, and where we can go from here on out.

The grand goal we wanted to achieve here were as follows:

To obtain a consolidated master list of current and existing site policies, with the intent to create a system for better tracking, updating, and providing feedback and revisions for these policies`

As validly pointed out by Makoto's answer, the best way to achieve more awareness of established policies would be by implementing it into the SE platform all together.

As it stands, we don't really expect SE to actively back this idea up in the short term. However, if we can come up with a good way that could fit in with other communities as well, perhaps we can submit it as a feature request using the new escalation process.
All though communities like A&M are second to the requests from SO itself, having it as a up voted idea, actively present in their backlog can at least draw some attention to it.

Another thing mentioned by Makoto's answer:

One thing I noticed that we lack is a FAQ meta post which contains a link to all of our FAQs.

To achieve this, кяαzєя has been tirelessly working on compiling a list of our existing policies by scrolling through the years of meta posts that we currently have available.

Originally we would have wanted to filter these policies for obsoletion, relevance and duplication. But in the end, this turned out to be somewhat of a bigger task than 1 person could achieve in the span of a month's spare-time.

However, the consolidated FAQ meta post can and will be a good stepping stone to continue forward with. As this will already ease the burden of searching for policies and the likes.

кяαzєя will provide some more details in this regard in the near future.

The grand goal for this topic was take a look at music requests. Conman's meta post points out some valid worries regarding their frequency, quality and general value towards the community.

"Investigating, exploring, and deprecating unpopular questions and topics." -- I think this is addressing the wrong problem. I haven't been active on this site in going on three years, and it's not because I was offended by the presence of music identification questions. It's because there was almost nothing I was interested in answering and nobody to answer what I asked. That's why general id requests became such a problem that we had to ban them, but Literature and SFF haven't---because there was nothing else going on here to balance them out

But even though music ID-requests themselves may not be the actual issue, the fact they drown out other content currently stands. Based on this we think the best course of action would be to ban music id-requests for the time being, at least until we get a sufficient flow of other content. At which point we can re-evaluate this decision.

But instead of taking our opinions and drawn conclusions, lets take a look at some numbers to back up this decision and opinion building.

The statistics below come from these queries I haphazardly thrown together so feel free to point out mistakes so they can be corrected as need be.

Looking at these numbers we can see that questions tagged music indeed make up a sizable portion of questions asked on A&M. As about 1 in 10 questions seems to be tagged with music.

It also seems that questions tagged with music are marginally better received overal with a current 44.5% of them still remaining open. As compared to all other questions, which stands at only 33.8%. A 10.7% difference overall.

However, the close rate is not all saying about a questions quality. Hence, lets also take a look at the scores 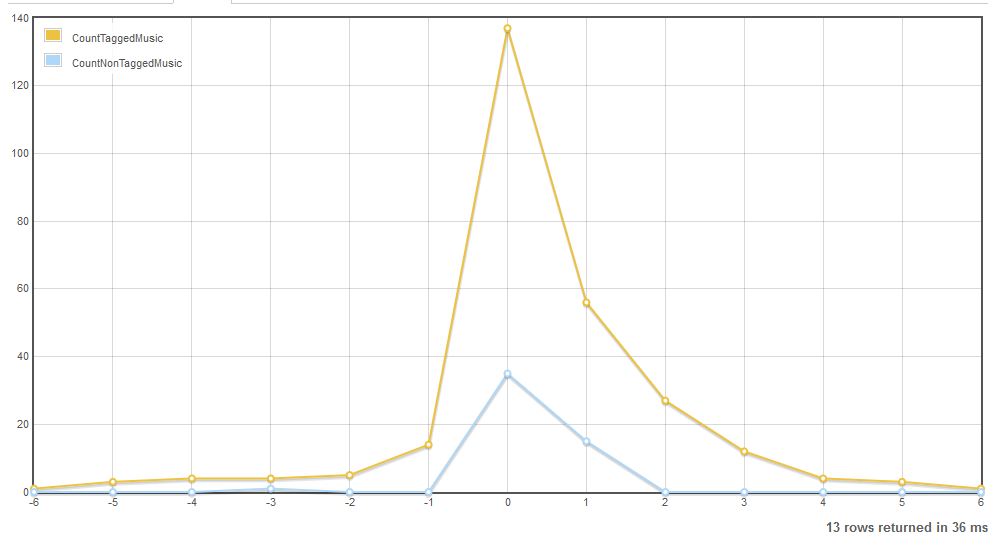 As can be seen the average score of questions stands at 0, with the median for both also being 0. The only different we do see is the min/max, being as follows:

Here we see that non-music questions tend to go up higher in the score lists, where music tagged questions seem to stagnate at most a score of 2.

And lets also add on the view metrics, as this is not an unimportant metric either.

Now this is a bit of a skewed view, as we are only about half way into the year. So lets also grab the data from last year to compare against. 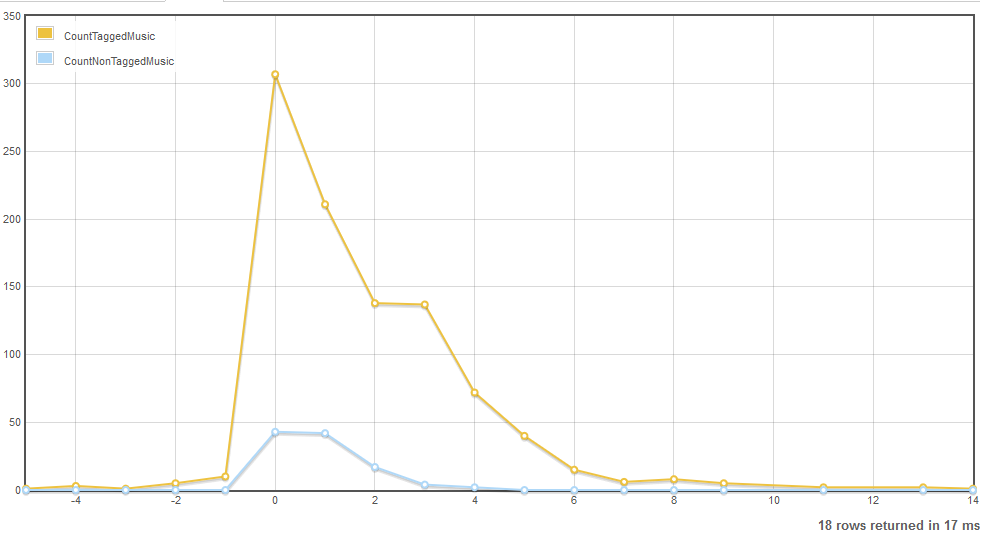 Given that the views are a bit biased, due to 2020 only being 5 months into the years, with the current metrics we can determinine the following:

It would also be usefull to compare these statistics vs A&M as a whole, and see how the general trend changed over time (if at all). 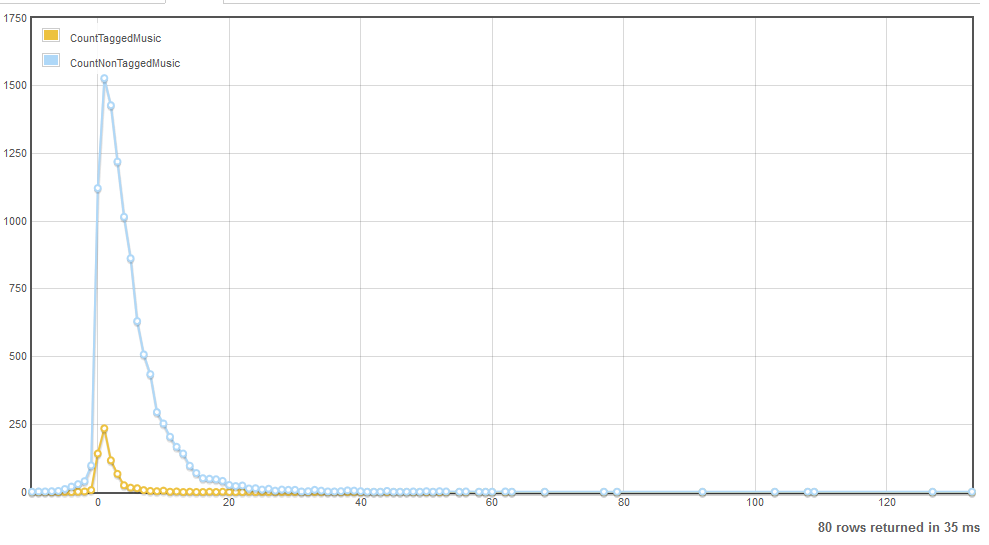 The following do not include deleted questions

By these numbers I would indeed say a not insignificant portion of these questions see the OP never returning at all. In general the rate of accepted answers is also quite low, however may also have to do with the other points addressed.

The askers rarely do much more than ask their question and leave.

We can indeed see that there is a significant portion of the people asking music ID requests that never return after asking. However, with only 1 in 10 questions being a music ID request, and +- 1 in 8 of those never being followed up upon I wouldn't consider this to be a very big issue.

The questions are typically poor quality

Personally I would agree that most id requests leave a lot to be desired, however looking purely by the numbers it would seem that the quality is almost on par with other content Hence this is a problem that should be addressed, but not only limited to music id requests

Frequently, the questions are asking about a recent episode of a currently airing show.

I'd say those could be easily put under the 'unnanounced future event' label. More on the reasoning can be found on the point below.

Sometimes, the question has no available answer ever

This can, will and is an issue we likely won't be able to avoid, even in other questions on A&M.
All given it is an ongoing show, we could close those as unnounced future requests. As we just won't know what the future brings. Where as for shows that have ended for say 5 years, we could quite reasonably say that the valid answer in that case could/would be that there is no answer.

However it is good to keep in mind that just because a show is still on going (and thus a answer might not be readily available at this point in time) should not nececarly be a detterant for questions. Could you imagine having to wait another 16 years before you could ask a one-piece question, just because it hasn't ended yet?

Now where do we go from here

First off, we going to work on deprecating music id requests.
We can expect a full deprecation of music ID requests in 2 months, and more details in regards to it in the next month.

Second, кяαzєя will be continuing on the policies consolidation. And you can expect a post regarding this in the near future as well!

And third, but not least. What will we be looking into in the coming month?
As we can see from the statistics above, a lot of questions end up being closed.
But more even so, content and voting seems to be somewhat lacking.

For this we will be investigating, and applying a sort of bountyboard.
This is still a concept in the rough, which we will see polish in the next month(s?) in their own respective Meta post. But sketch the initial gist:

Each month we will take a subset of topics, be it objects, recent events, or maybe even more specifics.
For these topics we will post a bounty, which will be rewarded with some rep (bounty) but also get a un-revokable place in a wall of fame (most likely a meta post).

How can we help/ what would you want from us?

In general, we would like feedback. Similar to our previous post, we would love feedback on what we are doing. Be it suggestions, critique or new ideas, regarding previous handled topics, new upcoming topics, or even the way of communication in general. Any and all is welcome.

On the other hand, the concept of a bounty board stems from a lack of interaction.
As pointed out, music id's are only a issue because they drown out other content, because there is no other content. So if you have any idea's on how we could reinvigorate the flow of interesting questions, then we would love to hear suggestions. Keep in mind however, we don't expect SE to actively back those, or any ideas in the near future.
So I would suggest we stick to suggestions that wouldn't require SE's interaction directly.

Fun fact of the month

This will be edited in by krazer in the future so keep an eye out ;)

10
What made you join A&M and engage with the community/site in the first place? How has it changed over time? What could engage you once again?
11
Is song identification the new show identification (and does it have the same problem)?
12
Now Announcing: A New Initiative for Anime & Manga SE Engagement (it's a work in progress~)