Should we really allow spoilers in the title?

By nature, this site is where we ask questions from both manga and anime. However %90 of the time, anime is behind the manga so asking a question from the manga can be considered as a spoiler for anime-only people.

A small example would be:

Why the character X is doing Y?

The problem is, in the anime we still don't know X and now we are sure that X will do Y.

Now there are many discussions about this I am aware but none of them is conclusive. Some are against it, some say it's fine. Others say we should try to do it without spoilers but if we can't then it's fine. Is it really? Let's imagine a scenario where a member of the community checks the questions daily. Then bang, he sees a spoiler from a show he is watching. He clearly did nothing wrong but the person who is seeking an answer didn't either.

Some examples from other discussions:

Should we have a “spoilers” tag?

What do we do with questions which are spoiler by nature?

Should this question have avoided spoilers in the title or not?

Thus my proposal is as follows:

We should clearly imply that the question itself is a spoiler. An example would be like:

[Show A - Manga Spoiler] Why the character X is doing Y?

With a standard like that, at least we can create a middle ground for both of the sides.

The rule I've always followed is to include spoilers in your title only if it's required for the title to be searchable, and clearly indicate what the question is about. In other words, if you can make a good title without spoilers, do so; otherwise include spoilers. A good title is more important than spoilers. After all, the ignore tag feature will allow users to ignore any tags in a series they wish to avoid spoilers about 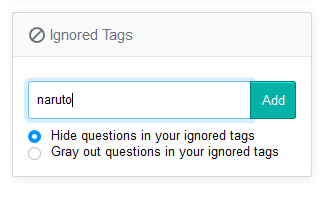 Not the answer you're looking for? Browse other questions tagged discussion feature-request .

26
What should our policy be regarding spoilers?
4
Should this question have avoided spoilers in the title or not?
5
What do we do with questions which are spoiler by nature?
1
Should we have a “spoilers” tag?

12
When should we use the anime and manga tags?
10
Should we allow “I want to skip the filler in series X” questions?
5
What do we do with questions which are spoiler by nature?
16
Should we allow recommendation questions?
14
Should we allow use of the term “trap” and other potentially offensive but common terminology?
5
Should we mark identification requests that turn out to look for the same thing as duplicates?
5
What kind of details should be in tag wikis?
4
Policy Proposal: On Spoilers, the Site, Chat, and Users