Is it alright to compile a list of a series' soundtracks in one discussion?

To clarify, what I'm describing is a discussion where the question is about a series' soundtracks and the answer would list the soundtracks used, the approximate time it occurs and a brief description of the scene when it occurs per episode.

I was planning on doing this on short series, for a start, so that others would simply have to look for one question, and see if the soundtrack they are looking for is already known or not.

If it's okay to do this, would it be better off as a community wiki rather than a regular question and answer?

I think it is alright not to include links as the information is sufficient enough such that the reader can search for it himself/herself across the web.

I personally would advise against it. It might work, but the level of effort is not ideal as it can become burdensome to maintain and update, therefore I do not recommend doing this. Such question can become very broad and hard to maintain and sustain for the the long run (i.e. copyright issues with linked content, lack of embedding for ease of access, linkrot), given the varying depths of media for each series or franchise.

We have tried to compile similar resource threads in the past of narrower scope, but the problem always leads back to the users. The types of questions related to music are often times less desirable to answer and oftentimes fall by the wayside. Most users that ask these questions are typically quite new and/or lazy and won't typically make an effort to look through a resource list even if it was placed in front of them on a silver platter.

It eventually gets quite tedious for people to maintain lists it resources over time due to the ever so decreasing gratitude and feedback given over time. But I won't stop you from making one if you feel that it may be helpful. Just make sure that you are not the sole contributor to such a list.

It might work. The only advantage I can see for having it here on Stack Exchange as opposed to on a Wikia/Wiki is that Markdown is more user-friendly than WikiText, so the barrier of entry might be lower. And so more people might actually be bothered to type in that sort of information.

One possible issue I can see is the 30,000 character limit for posts (I think this applies to both questions and answers). So this may be a problem if you try to tackle really long-running series such as Naruto or One Piece. With something of that scale, it might be better just to outsource the information to an actual wiki, which is better equipped to handle that quantity of information.

I don't know of many wikis that actually have this sort of information though. Maybe those wikis could use some more promotion :P

On the other hand, it's possible have really long chains of answers on Stack Exchange, so it's not unfeasible. It may be doable by, for example, splitting the listing into multiple answers; I wouldn't shut the door on this one. If such a mega-question existed, most likely I would occasionally drop in to insert a soundtrack listing here or there. (I already have a few incomplete partial lists in my personal notes from my sporadic Naruto rewatches.)

In any case, there are two main use cases that I can think of where a song-episode index might be useful:

1. Finding the song from the episode + timestamp

This might be helpful if someone comes across a song in an episode and wants to know which song it is.

In these cases, an episode + timestamp index would be helpful.

The Puella Magi Wiki has something like this. (It's not complete though.) Example: 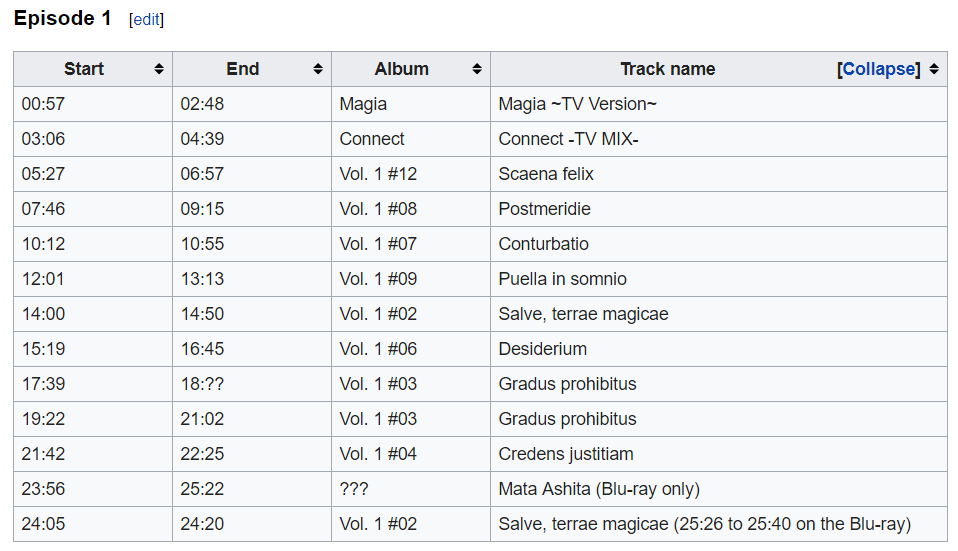 2. Finding the episodes + timestamps from the song

This might be helpful if someone is trying to find all the occurrences of a specific song in the anime. Or if someone is listening to the soundtrack and they want to know which scene it reminds them of.

In these cases, a song index would be helpful.

I know that Nichijou Wikia has something like this. (Not every song has a complete listing though.) Example: 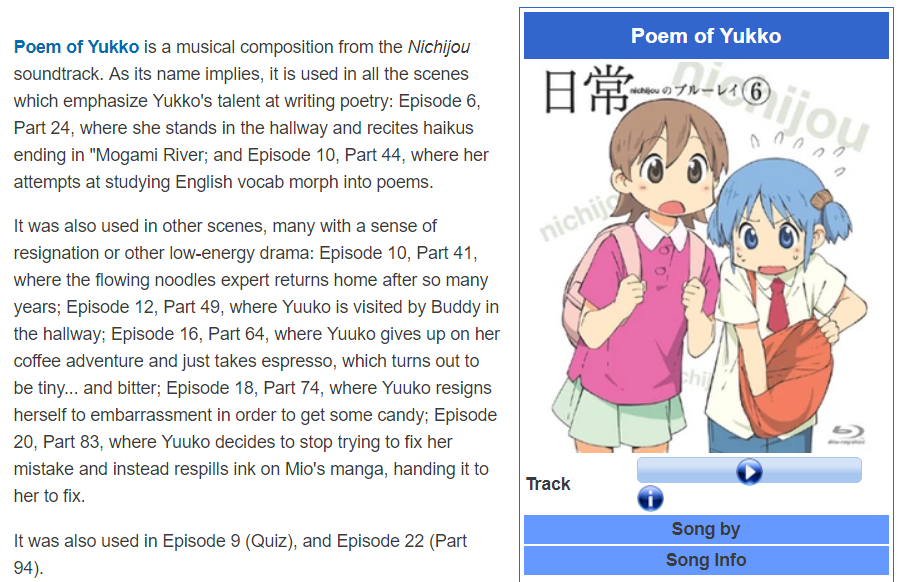