How did this edit 'deviate from the original intent of the post?' 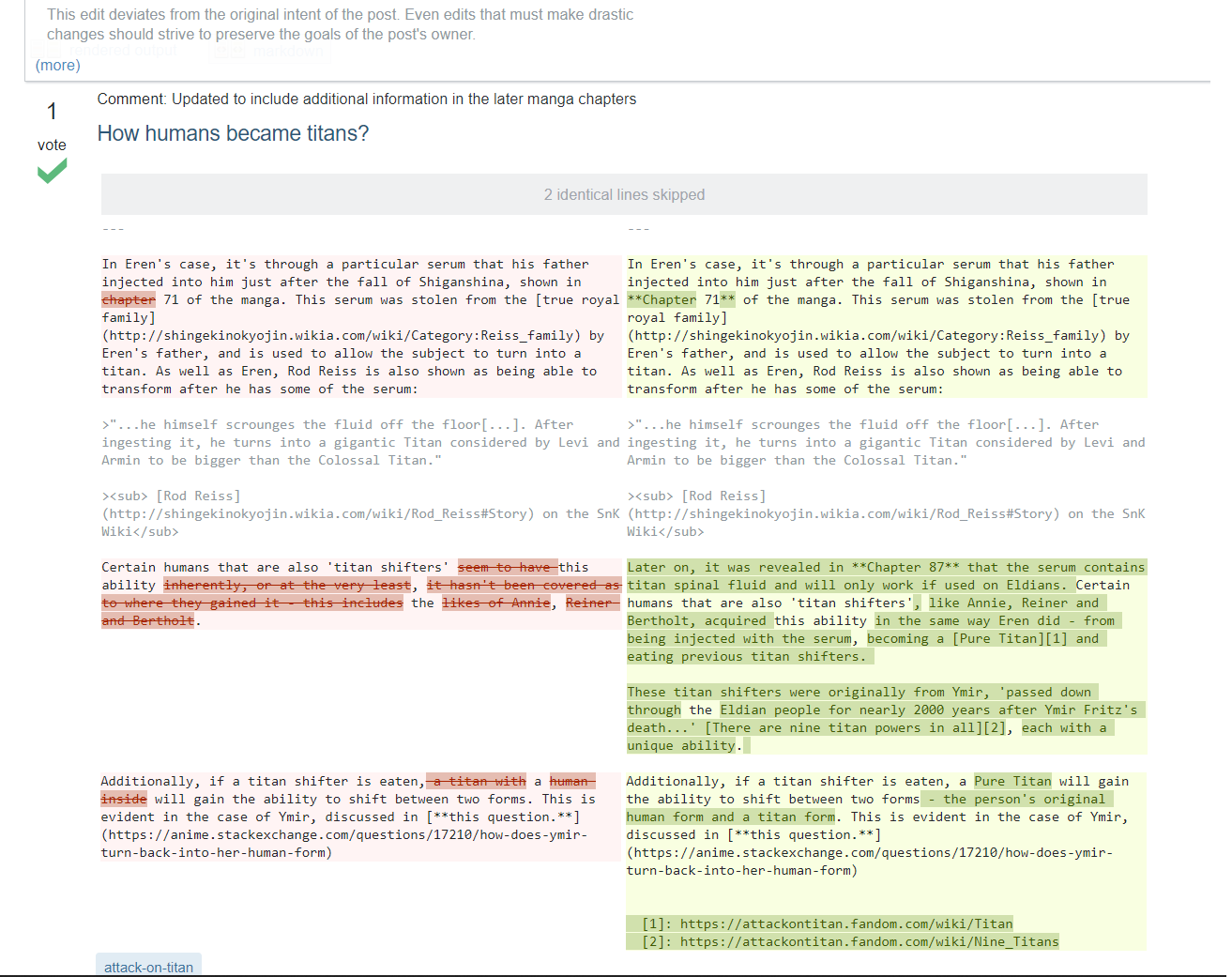 I consulted the help center and in one of the reasons given on when to edit, it is stated that you can edit 'To correct minor mistakes or add updates as the post ages,' which is what I just did. Since at the time the answer was posted no information regarding how Reiner, Annie and Bertholt acquired titan shifter abilities or where this came from was revealed yet and since this information is now available at later chapters, I just revised that part to state how they acquired titan shifter abilities and where this came from.

Also, the question was asking how titans became humans so it is only natural to include the part on how Ymir was the first titan, how her powers were eventually divided and passed down until the time the events in the manga happened. As of now, I cannot see how this deviates the original intent of the post because as far as I know, the post's intent was to provide information on how humans became titans, and my proposed edit just adds additional facts regarding the subject and links to additional resources about the Nine Titans and the like.

I'm not angry that my edit was rejected by a reviewer (some of my edits were rejected before and I realized my mistakes; this is just pending so this may still be approved). I just want to understand why the reviewer was able to give this comment so that I'll be able to improve future edits I'm going to make :)

UPDATE: This was rejected a long time ago and I'm still not sure why. Another pending edit of mine was also rejected by one reviewer, as shown below.

I'm still as confused as I was when I first posted this question. 'This edit does not make the post even a little bit easier to read, easier to find, more accurate or more accessible. Changes are either completely superfluous or actively harm readability.' How does this not make it 'easier to read' when I just corrected minor grammatical mistakes? How does it not make it easier to find or accessible? How does it not make it 'more accurate' when Makarov's name was corrected from the wrongly-spelled 'Makorav'? How is it superfluous when the point of editing posts is to correct any mistakes made, if there are any? Finally, how does it even 'harm readability' when what a person is doing is just correcting grammar and wrong spellings?

I'm pretty sure I'm one of the people who rejected your first edit (and if I didn't, I would have), so I'll give me two cents on it. While your goal may have been to maintain the author's original intent, you added enough new information that you could have just written a new post. Instead, you basically just grafted that new post into the current post through an edit.

My suggestion is that, in a case like this, you first comment on the post telling them where the new information is (in this case, new chapters) and suggesting that they add it. That way, you give the original author a way to add the information while ensuring that their original intent is maintained. Given that you seem to have basically gotten rid of one of the three non-quote paragraphs and wrote two paragraphs, it's hard to tell how well you maintained the original intent.

In regards to your other suggested edit, while fixing the spelling of the person's name is definitely helpful, one of the other edits you made was to change the post from being in entirely present tense to being partially in present tense and partially in past tense. I didn't reject this edit, but in my view that change is not helpful or even correct.

5
Why were my comment flags declined?
2
How far should we take our editing?
2
How did this edit not address the "critical" issues of the post?
2
Should this edit have been made considering there are people trying to remove it?
13
Can we stop immediately closing "Where can I watch" questions as "Requesting illegal copyrighted materials"?
1
Sources/Citations that do not exist anymore, are out of date or probably never existed in the first place
2
Is adding more proof/evidence not allowed?
6
Is this question about an oni with a dragon on them on or off topic?
5
Regarding actions on posts flagged as low quality