How do we respond to "Is my theory right?" questions?

I see these pop up on occasion thus we don't really have a problem with them unlike some other kinda of questions we ended up blacklisting. these kind of questions the OP posts a (generally badly/un-formatted) question explaining a theory they've come up with and asking if their theory is right or wrong. these theories generally come from a very limited view point of not having seen all the released material and are mostly just vague speculation. a recent example is this question: Re zero my theory about Subaru, The Witch and Amelia 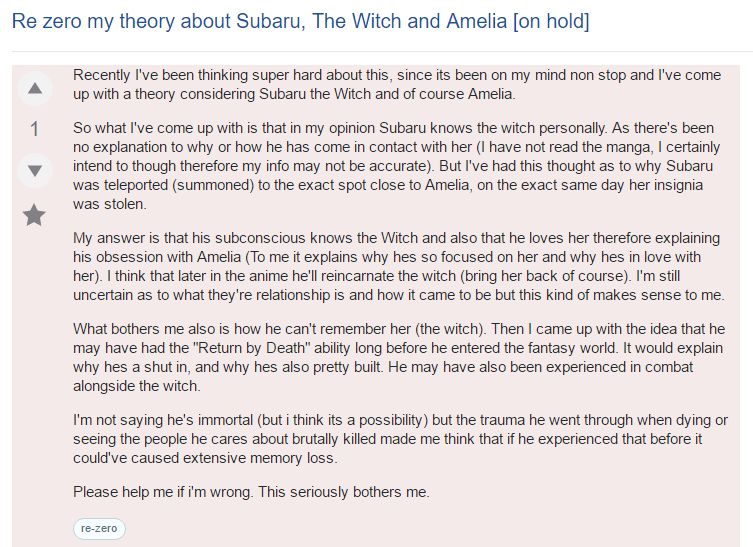 on the one hand i feel as if they are trying to spark a discussion which the Q&A format isn't really for but on the other hand i can see how a question can be answered by a user pointing out all the inaccuracies/flaws (because rarely do i find these questions citing any sources for their theories).

How do we respond to "Is my theory right?" questions? should they be closed as being too broad? (as i said i feel as if they are trying to spark a discussion). or would downvoting for lack of usefulness/lack or backed up research (in the case of wild speculation) be enough

So far these have proven quite rare, and one can find good and bad examples of fan theory questions. The post which triggered this question is arguably a bad example, but good examples have included Is Ditto a Failed Mew Clone? and Was Lelouch the person driving the cart in the last scene of Code Geass R2?, both of which got a good reception and fairly clear answers (though they did also need protection due to multiple low-quality/deleted answers). Hence I'd hesitate to suggest a formal policy is needed for this.

However, the first thing I would try is to rewrite the question as a question about the work rather than a question about a fan theory. In many cases the theory is all just background information which motivates one key question, and that question would be on-topic even if the theory was not included (but not as well motivated). Some editing is probably justified, but there is not any need to remove the motivating fan theory.

If that is not possible, a decision needs to be made. If the theory is notable (e.g. it has been posted or commented on in multiple locations), we should generally air on the side of answering it. Likewise, if the theory is simple and well-motivated, there is a good chance it is interesting and answerable. I should note that (as with many questions on this site) some amount of speculation may still be needed to answer these questions, but it's very much possible to write a good speculative answer based on known facts about the work (not merely based on arbitrary guesses), so the lack of existence of a canonical answer is not necessarily grounds for closing or deleting the question. Indeed, both canon and fanon are on-topic here; questions about the latter are rare and occasionally problematic, but also sometimes very interesting.

Where we start to run into problems is when people start asking about whatever seemingly random theory they have just thought of. In many cases these can not be succinctly summarized into a single question, meaning they are probably too broad. This is similar to the "check my work"-style questions on other sites, which also tend to be problematic for various reasons. They may also be poorly motivated from in-universe information, making good speculation difficult or impossible, and hence arguably opinion based (though I think we are sometimes a bit too eager to use this even for questions which could have some explanation in-universe). And in some of the worst cases it's not even clear what the actual question is. So depending on the question we have several possible close reasons, but I think "Too Broad" is probably the best one in many cases.

Like I said before though, these questions have been relatively rare in the past, and it's usually easy to tell immediately whether such a question could admit a good answer in this format. So I don't think we need a very formal policy on these types of questions. A good rule of thumb is that if you can't summarize it as a single, specific question (not something generic like "What's wrong with this theory about X?") then there's a good chance it's too broad, but exceptions to that rule are possible if the question is clearly answerable.

One option for some of these: have the poster convert it from a question that lays out a theory and says "Is this right?" into the question the theory is meant to address and a self-answer containing the theory.

The problem with this particular question (and most of the other bad ones I've seen) is that it's not really a question; it's an answer that carries an implicit question only discernible to those who've seen the series. I haven't seen Re-Zero, so I have no idea what the actual question in that post is, but I can tell it would be possible to write a question roughly along these lines:

Then in a self answer, lay out your personal theory, with evidence. This turns it from an attempt to start a discussion into a question that can be answered. We can evaluate the question and answer on their own merits, vote on them as normal, and even if the self-answer turns out to be bunk, there's a chance for others to come in and contribute better answers. The OP might not be happy to have their pet theory debunked, but the site as a whole still benefits.

I've used this tactic a couple times on Literature when I had a question that I'd been "thinking super-hard about" and wanted to share with others. It seemed to work pretty well; in both cases my question and answer received some upvotes, and it seemed like people generally thought the site was better for having them.

Not the answer you're looking for? Browse other questions tagged discussion acceptable-questions .