Should this edit have been made considering there are people trying to remove it?

over the past couple of days there have been a couple of edits by anonymous users on this answer on which character has died the most in the Dragonball Series. the edits attempt to remove the part

now on the 18th of December the above was an edit suggestion by an anonymous user which i rejected. 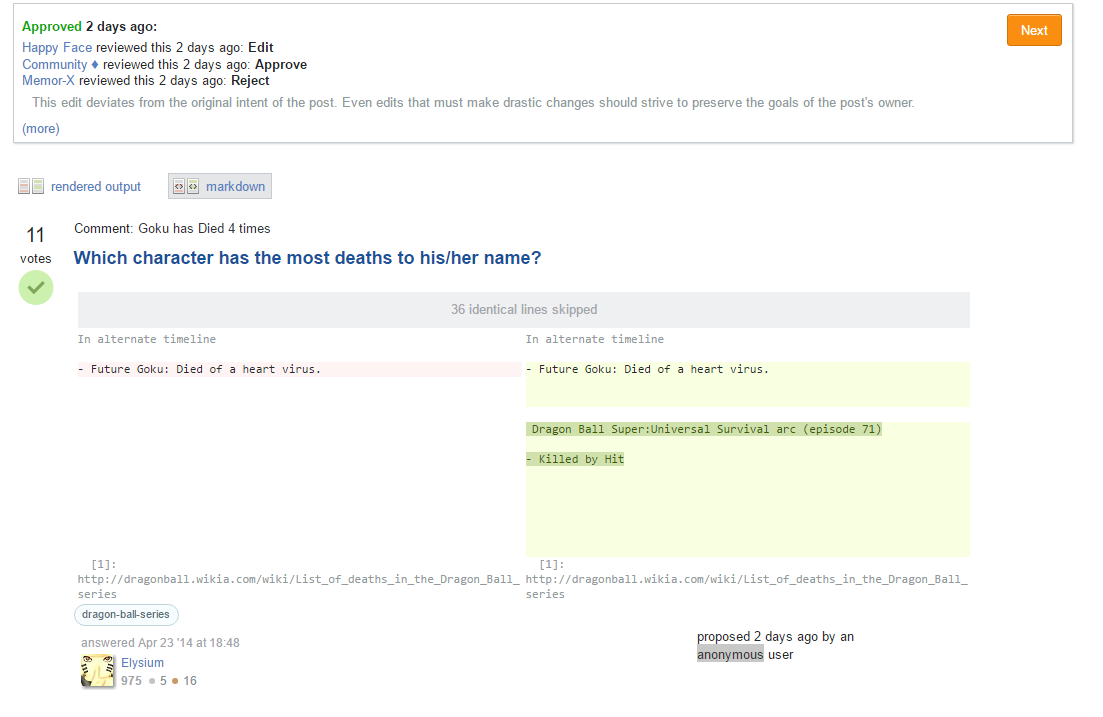 my reasoning for the reject was that the answer was made back in 2014, before Dragonball Super was a thing as such listing a death from Super deviates from the original intent of the post's owner.

Happy Face's edit was to change the "Dragon Ball Super:Universal Survival arc" part to just "Hit Arc" and move the episode number to the dot point.

twice already anonymous users have tired to remove this and boht times the removal has been rejected. however the second reject made on the 19th is what i want to highlight as one of our Mods, кяαzєя, used the same pre-fab reject reason i did originally in trying to reject the addtion in the first place

This edit deviates from the original intent of the post. Even edits that must make drastic changes should strive to preserve the goals of the post's owner.

So i am wondering, the edit i tried to reject that was later approved because it was "improved" (based on what i remember of the buttons available in the review que), should it have made in the first place? especially considering that the first edit was made when episode 71 had only just been aired in Japan and the anonymous users are citing episode 72 (which according to wikipedia hasn't even been aired yet)

I don't think the edit hurts the post in anyway, but don't think it should have been made either.

The question asked is Which character has the most deaths to his/her name?. The edit made does not change this fact, and neither should it have, because if the facts would have changed a new answer should have been posted instead.

This edit does however reflect to the comments underneath the question

is it even necessary to ask? its Krillin little bald dude always gets it lol his longest streak of being alive was in dragon ball I'm pretty sure haha He is the fodder for DB and DBZ –
Dupree3 Apr 23 '14 at 15:28

@Dupree3 Thats what I originally taught aswell. Then I started hearing rumours that it was actually Goku that died most. As I did not watch all of them yet, and am not directly planning on I figured ill just ask and let facts support it ;P –
Dimitri mx Apr 23 '14 at 15:31

This comment is most likely the reason for Goku being included in the list as well. As this portraits the difference in their deaths, this change does improve the answer somewhat.

Now to cover the following statement as well:

my reasoning for the reject was that the answer was made back in 2014, before Dragonball Super was a thing as such listing a death from Super deviates from the original intent of the post's owner.

The question is tagged as dragon-ball-series, as the tag description mentions

Dragon Ball is a Japanese manga series written and illustrated by Akira Toriyama. It was originally serialized in Weekly Shōnen Jump from 1984 to 1995, with the 519 individual chapters published into 42 tankōbon volumes by Shueisha. It is to be used for questions which pertain to the Dragon Ball series/franchise as a whole.

This would mean that the new series would also be included, and the current answer could be out dated by the facts to follow in future episodes.

All together, when asking this question I did never expect there to be a new Dragon bal series.

Not the answer you're looking for? Browse other questions tagged discussion editing .

3
Should we have separate tags for the Dragon Ball series?
6
What constitutes an "obsolete" comment?
6
When to accept or reject a suggested edit?
2
How far should we take our editing?
16
Identification Request Cleanup: Phase 2 - Blacklisting
1
My question got closed unfairly
1
The right answer to a topic is in a post that was deleted
6
How did this edit 'deviate from the original intent of the post?'
6
Is this question about an oni with a dragon on them on or off topic?