On Sep 19 at 11:30 I got awarded with the clean-up badge. But I did not get a notification about it. 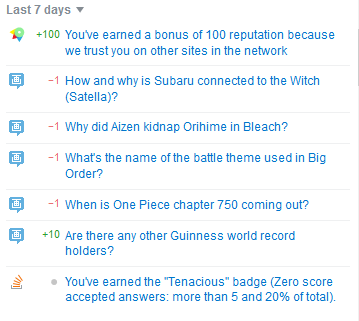 Did the badge clean-up it's own message as well? Or is this a bug of sorts?

This is intended behaviour.

Back in very old days, you were notified of everything that happened until it got annoying to people so it was turned off. The turning-off message by Nick Craver reads:

We're also hiding several badge notifications based on if you're associated ("veteran") or not (the clutter ones like autobiographer that you get immediately as well).

You can also find a list of badges that aren’t hidden over at meta.SE. That post (by balpha) also includes a definition of veteran:

By checking your profile, you have 200 reputation on at least three different sites. Thus, you are considered a veteran across the entire network. The only bronze badges you will still be seeing are those mentioned in the list:

Not the answer you're looking for? Browse other questions tagged bug status-bydesign .

2
Inconsistent line-height being applied to certain tag classes in chatroom and chat transcripts
3
JavaScript broken in Firefox?
2
User with 1 reputation is able to comment everywhere
2
Review queue bugged?
1
Why aren't links opened in new pages?
7
Synonymized tags does not show up in the list of tags when it is partially typed
2
Why don't questions with close votes always show up in the Close Votes review queue?
5
UI display bug while viewing edit history