Can we blacklist the phrase "When I was" when asked on an identification request?

Using this phrase along with identification-request would trigger the system to display something like this (along with the "Your question couldn't be submitted. Please see the errors above." message): 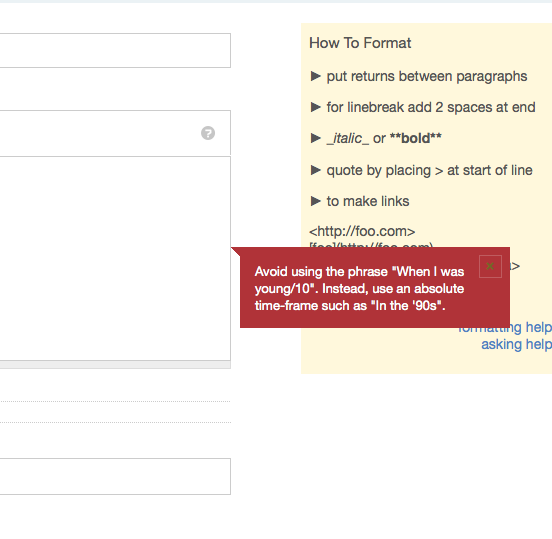 Thanks to @Hakase and @Madara for answering my questions about how this would be implemented. Since I haven't totally made up my mind on the specific issue of using the phrase blacklist, I'll summarize the pros and cons as I see them.

I'm still wishy-washy on the subject, but I'm leaning towards supporting the end of id requests altogether. @senshin summarized the response to this proposal from that point of view in a comment:

Movies and TV apparently has also gotten sick of id requests; when they had the initial discussion about whether to allow them, Robert Cartaino posted an answer saying they would regret it. On January 6th of 2015, Movies and TV moderator Napoleon Wilson posted this comment on the answer:

Oh my, how right you were with all of this, if we just had listened to you back then.

Arqade has apparently decided to ban id requests on their site.

Using the phrase blacklist would just be a very small solution to a very small part of the rather large problem of lousy id requests. On the other hand, there seems to be widespread disagreement among the community on whether allowing id requests is a net positive or not. I can certainly see some negative aspects to getting rid of them, but it seems like when you need a custom close reason that only applies to one specific tag, that tag is a problem.

Coming at this from the other side, we already get complaints that we're unfriendly to new users. Imagine being a new user, possibly with subpar English skills; coming to post an id request; writing "when I was 10" in your question; and having the system itself pop up a message complaining about how bad your question is. It's like those password checkers that reject all your passwords—"this one doesn't have any uppercase letters", "this one doesn't have any special characters", "this one is too short", "this one is too long", "this one only has 25 bits of entropy, which according to information theoretic principles implies it can be cracked by a determined attacker in 3.23144153 minutes"...this site is supposed to be fun. Personally, I think we can do without a lot of these users posting id requests, but this could be annoying even to users who approach in good faith, read the FAQs and the tour, and do their best to post a good question.

I also still have some concerns that the system is too coarse-grained. If we're just doing a simple regex search, I'm not sure we can avoid false positives effectively enough to make sure this feature stays out of the way for most users and only affects users who really are writing an awful, vague id request. I think a lot of what Paul Graham writes in the first section of his essay on spam filtering is applicable here: using a regex-based filter like this is similar to using a spam filter that looks for "DEAR FRIEND!!!!!!!" in the subject line. It's us trying to identify what we think are the relevant features of bad id requests. Users who are really determined will find new and wonderful ways to be totally vague and unhelpful, while users who are actually trying may just be disgusted and put off that they're being called out for using a common English phrase. Some of them may find their way to meta to find out what they can do about this, but many more will probably just go "Jerks" and go off to some other anime site. Like I said, I don't know how much we really need these users, but it's something to consider.

On the other hand...jeez, every fricking person who writes an id request uses exactly the same vague, totally unhelpful wording, as if we know how old they are and thus what year it was when they were ten! Maybe it has something to do with the fact that user profiles used to display your age; maybe they thought people could just click over to their profiles and do the calculations. It's clearly not a good use of anyone's time, especially our moderators', to go through every single id request and post a comment saying "Can you please give an exact year? We don't know when you were 10, you see, as we don't know you, and can't even guess how old you are since you've put a picture of an anime character as your avatar."

Maybe we could try doing a test run. Set up the filter and have it on for a few months. After a few months, come back and look at the crop of id requests posted in that timeframe to see if there was any improvement, however marginal, using a set of statistics like the ones in JNat's meta post. After all, if we have the filter in place, then many of the people using this phrase will likely either write better questions, or give up and go away. Whatever happens, we can use the statistics to find out what effect the filter is having and talk about whether we can live with that.

This answer was originally a few comments under the question, but I've decided it makes more sense to write up a complete answer.

I find it extremely annoying when users do this, especially when it's of the form "When I was X years old" or "when I was a teenager" as if that tells us something. While it may be possible sometimes to determine the user's age from their profile, this is certainly not the norm in such cases. "When I was younger" is less annoying to me; it's essentially synonymous to "a while ago". I'd still prefer people avoid it, but at least it doesn't mean they think they're telling us something useful.

With all that said, I don't think a blacklist is the appropriate measure. For starters, using such a phrase as if we can gather something from it is an indication that the asker doesn't know how to ask a question. They aren't thinking about it from the perspective of what might be useful to someone on the other side of a computer screen who doesn't know them. Their question is relatively likely to end up with other problems, and fixing this one preemptively won't make it suddenly fine. The date isn't usually the most important factor in determining what they are remembering anyway.

That might be okay if there wasn't any harm, but a blacklist always has a risk of false positives, and this one is pretty bad. "When I was _" is a very general construct in English. The "_" here could be many verbs, adjectives, or nouns. It could be, for instance, "When I was visiting India in 2010, I saw this anime on an English television station", which is a useful bit of information. Similarly, it could be "When I was watching One Piece, this PV came on during a commercial break". It would be difficult, if not impossible, to determine computationally (via regular expressions and other purely syntactic analysis) whether it's a good case or if it should be blocked. Also, according to this comment, the blacklist would probably need to apply to answers and posts in other tags, which just means even more false positives.

Since I'm sure this point will be made if I don't bring it up, yes, most of the good occurrences of this can be changed to evade the blacklist. Some of them can even be improved by being written differently. This is a general fact about English: it's rather fluid, and things can be written in many ways. But it's also true that the bad instances can be written differently, and a particularly lazy asker could just do this rather than following the advice. So the fact that the blacklist is easy to evade isn't really a positive point.

In addition, this doesn't seem to be that big a problem. The OP identified 68 questions with this phrase. That means we'd expect to get about 1 question matching this pattern per week, and in my book that's a pretty small problem. Among those, quite a few use the phrase but also include useful time frames in absolute ("late 80s") or relative ("5-7 years ago") terms. These should ideally be edited to all be in absolute terms and to have the phrase removed, but that's a fairly minor thing. The bad cases are likely to only be a couple per month, and few if any of those would be turned into good questions solely by removing this one fact and including a useful date.

So, in short, while I also find this very annoying, I don't think it's a major problem for the site, and I don't think a blacklist is the right way to try to fix it.

What I'd prefer is if we can come up with a guide for how to ask ID requests for new users which would include this and many other common mistakes (NOT our set of "guidelines" which are inconsistently applied and don't always correlate with question quality, but something that would actually tell users what they are doing wrong and how to fix it). We would point new users to this guide, and interested ones could see everything they are doing wrong and improve their questions. We'll still end up with a bunch of users not fixing their questions, but at least then the ones who really want to but don't know how will be able to improve their questions.

Is it possible to make a pop-up that does not prevent a user from posting a question containing "when I was" but which alerts them that that they wrote that phrase and probably want to change it? (The text in the red pop-up that Madara Uchiha suggested looks good.) On the Japanese Language SE, when you start to post a question, you can see on the right-hand side the "How To Format" box which contains instructions such as the phrase "We prefer questions that can be answered, not just discussed." Then, when you start typing a title for your question, if site deems that the wording of the question title might likely be the sort which cannot be clearly answered (rather than simply generating a lot of opinions), it will pop-up a red message warning that you might be asking a question which cannot be easily answered and that therefore you might not receive answers to it if you post it. You can click the "x" in the corner of the pop-up to close it and continue writing, choosing to revise your wording if you like, but I believe that the site will allow you to post it even if you do not change the wording.

Not the answer you're looking for? Browse other questions tagged feature-request identification-questions .

14
Why is this site so unwelcoming to new members?
13
Can we get some more definitive numbers on identification-request stats?