What should be done about image search requests that may not be trivially resolvable to a fraction of users?

When I was looking at this question, I noticed some votes to close it as per the consensus reached here. I didn't have SafeSearch turned on, but in any case, I failed to get any useful results from the Google Reverse Image Search. iqdb, which does not appear to filter for sexually explicit material, produced a similar lack of promising results.

However, other users reported getting fairly useful results. I have also seen this happen with other questions, where my reverse image search attempts failed, but those of others did not.

In this case, what should be done? While to some users, the question is "trivially solvable", to others (including, perhaps, the OP), it may not be. I can see a motivation for closing such questions as duplicates anyway, but it seems ambiguous enough to me that it seemed worth asking on Meta.

Here are my thoughts on the matter. I intended to write these up earlier but forgot. Essentially, I think this problem is mostly solved by a more precise definition of what is "trivial" in the context of reverse image search.

What I was intending when I proposed marking duplicates is that it would only be done for truly trivial questions, not for all questions that could conceivably be answered using reverse image search as a tool. When you click "search by image", Google gives the following information (in some cases, some of these may not be present): 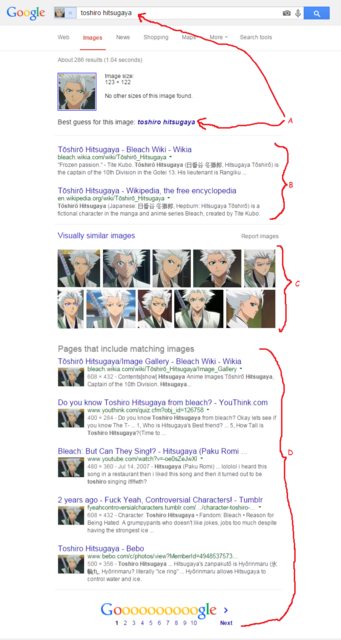 An image is trivially identifiable if one or more of the following is true when you do a reverse image search (with the language set to English):

A "reputable source" here includes things such as Wikipedia, large databases of anime/manga like MAL or Anime Planet (see What databases and listing sites exist for anime, manga, etc?), an image board site (e.g. Danbooru), series-specific wiki sites, large blogs, and the like. In some cases, there may be other sources in the results (youtube videos, facebook posts, etc.). While any one of them individually might not be enough to establish the source, a consensus of these sources still does.

For our example, (A) matches the name of the character. (B) has 2 reputable sources confirming this. The first link in (D) is also a reputable source, and while the others aren't, 4 of them together is a strong consensus. Thus, all 3 of the above points would be met, and the image is clearly trivially searchable (and we didn't even need to go to the second page of the results).

These questions are trivially identifiable in the sense that you could be reasonably confident in the answer within a few seconds, without even going to any of the sites listed to check, and completely confident upon checking the sites. In practice, usually just the "best guess" alone is enough, and that doesn't seem to depend much (if at all) on your location. In the rare cases that it doesn't work, there are still usually helpful results on the first page or two.

If you need to go past 2 pages of search results or click every link to find the one that happens to have the answer, it's still searchable, but not trivially so. You're probably better off writing an answer in this case. It's quite possible that other users will see different results based on their location, and would not be able to find the image with reverse image search. The cutoff at 2 pages is debatable, but my own experience has been that if Google is going to give useful results at all, they'll usually be near the top, and after a couple pages the results are useless.

This doesn't completely solve the issue of location-dependent search results, but it does alleviate it a lot. Naturally, the exact criteria are open to debate, but the point I'm making here is that if you're going to say the image is trivially searchable, it really should be a clear enough result that you're reasonably confident it won't depend on location. It's rather rare that Google will get the right answer in one location and be completely wrong in a different location. Usually, when Google results differ between locations, it's a case where there are very low-ranking poor matches that happen to get included in one location but not another; these only rarely succeed at identifying the series. In the example of the OP, these were various "sketchy streaming sites" containing the phrase "ninja hentai"; that's far from enough to identify the series. In the rare cases where the results are completely different and are useful in some locations but not others, when we identify such cases the question should be reopened and answered because we can't reasonably expect users here to try every possible location to get their answer.

Not the answer you're looking for? Browse other questions tagged discussion identification-questions .

15
Hey! Let's talk about those image id-request we all know and love so much

3
Tutorial about how to use Reverse Image Search
14
Are we really ready for graduation?
25
Improve question quality by informing users of reverse image search sites
11
Do identification-request questions attract users that don't contribute to the site?
24
What we'd like to do about those gosh darn "identification requests" questions
11
What should be done about an answer that is plagiarizing another's post?
6
Regarding answering identification requests in comments