Are "What episode does [event] happen in [anime/manga]" like questions on-topic?

Is asking about when a specific event happens in an anime or manga on- or off-topic? For example:

In the NANA manga, when does Nana Komatsu break up with Shouji?

In Fullmetal Alchemist: Brotherhood, when do the brothers find the Philospher's Stone?

In Katekyo Hitman Reborn! the anime, when do the Tenth Generation Vongola Family gain the half Vongola Rings?

In the manga of Ouran High School Host Club, in what chapter does Tamaki realize Haruhi is a girl?

I thought these may be of-topic because:

They also may not be fit for other reasons.

Lack of research is not a close reason, that's what down votes are for. This is an issue which has come up on multiple Stack Exchange sites, and was implemented with the General Reference close reasons. However, that was considered to be a massive failure and has since been removed on all sites which implemented on it. It just results in users drawing arbitrary lines in the sand for when a question is too simple, which is also why I disagree with your second reason for why these questions should be deemed off-topic.

Do think these are good questions? No, they're crap, but that's what down votes are for, not close votes.

My thoughts on this are: questions with lack of research effort are not by default off topic. But this can be set by the community. Asking any question without providing your effort will make this site a sort of "Do this research for me, I'm too lazy to type on Google".

I don't think we should be too lenient against those. And by the way, it's not true that the General Reference has been totally removed. It still exists on EL&U, for example: 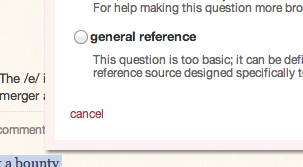 Besides, episodes numbers aren't necessarily the same across countries (Japan and Italy for example are different). But your points are even more compelling:

So the point is: Should we decide what questions are too basic?

For me, any question that is really too basic such as What is Naruto's last name? should be closed (if we decide this, the close reason would be off topic) and let other questions opened when the question might look basic but is more complicated, and especially if the OP shows some effort on their part.

So, General Reference being there or not, as long as it won't be there, we should probably close as Not A Real Question or Too Localized.

We're not here as a sort of quick encyclopedia resource.

Not the answer you're looking for? Browse other questions tagged discussion allowed-topics .

The Overflow Blog
Featured on Meta

12
Now Announcing: A New Initiative for Anime & Manga SE Engagement (it's a work in progress~)