When does the Beta phase of Anime SE end?

I was browsing Area51 and I noticed we have been in beta for 554 days now. 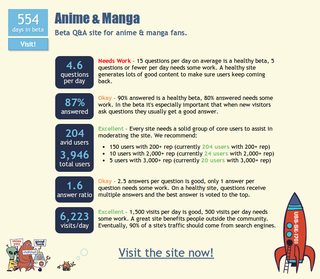 If a site reaches critical mass, it becomes a full member of the Stack Exchange Network.

Since an official answer seems somewhat unlikely, I'm expanding my comment to an answer.

A site reaches "critical mass", according to SE, when the site exhibits a normal growth pattern of users, steadily increasing traffic, and has enough incoming questions to sustain its community. At that point, it's clear to them that the site is in no serious danger of becoming a ghost town. There's also a quality aspect to the evaluations; generally, they want to see that the questions and answers being posted here are high quality compared to other resources which are available.

Based on this metric, we are apparently ready for graduation, and in fact have been for some time. But so are quite a few other beta sites. Of course, our status is assuming nothing has changed, but I'm fairly confident that if there were a major problem that would prevent this we'd hear about it from one of the community managers.

So, at this point, we could graduate essentially any time. With that said, the only real changes that will happen are moderator elections, higher rep levels for privileges, a new site design, and a few miscellaneous things. Of these, the one that takes the most time is the site design. It's hard to say how many sites are ahead of us in the queue or how long each one will take, so it's impossible to give a good estimate from our end when this will happen. But there's no serious risk of this beta being shut down or failing.

Since the ball is now in SE's court (so to speak), there's nothing more we need to do here. Just keep asking/answering questions well, and graduation will happen when it happens. However, if you do want to prepare (this is not particularly necessary), the most significant change functionally will be new higher rep levels. Here's the levels on the most recent graduated site; ours will be the same (barring any unusual circumstances). Most of them are significantly higher than our current levels. Having more users with the important privileges (e.g. Edit freely (2k), Close votes (3k), Moderator tools (10k), Trusted User (20k)) will make that transition smoother, so this would be a good goal to set for yourself. See Are we really ready for graduation?, but note that this isn't as serious of an issue as I made it seem there.

14
Are we really ready for graduation?
10
Raise the reputation thresholds to those of a full site (with or without a design)

11
When should we use the anime and manga tags?
9
What can we do to get more answers?
5
Do we need Unicode Tag support?
11
Do identification-request questions attract users that don't contribute to the site?
34
Congratulations, Anime & Manga is graduating!
6
Why does the layout and design of the home page looks a bit dull compared to other Stack Exchange websites?
7
Does the community want the accepted answers to be pinned to the top?